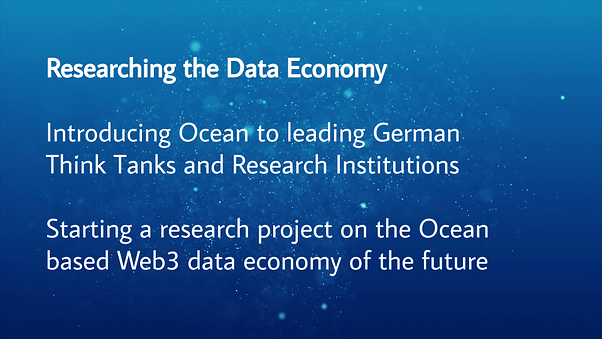 The proposal in just one sentence

By introducing Ocean Protocol and the Ocean Marketplace as a potential Web3 open science hub to leading German research institutions I want to enable economic research in this field and promote Ocean as “connecting tissue” and “reserve currency” of the data economy. I hope stimulate research interest and more (to be explained).

Zero: A general framework is needed for the Economics of Science, especially in the time of data economy. Ocean can play a vital role in this regard, because it introduces market mechanisms to data services and it builds on FAIR data governance at the same times. FAIR means—Findable, Accessible, Interoperable, Reusable.

We are currently reaching a tipping point for the European economics of science and we must employ all possible assets: A mature model of the data infrastructure, full adoption of the European Open Science Cloud (EOSC), openness for citizens’ and businesses participation in building the knowledge society and addressing the new technologies at our hands, while establishing of an ecosystem of excellence.

The potential role of Ocean Protocol within this is not to be underestimated. While it can be most likely integrated with the European data infrastructure and into the EOSC as connecting tissue, it also enables the participation of every citizen, company, institution through relatively low entry barriers. The pricing mechanism and the integration in capital markets will likely help in establishing an ecosystem of excellence while the openness of the public blockchain allows excellent research on the dynamics of an evolving data economy that values privacy and security.

All of this requires patience, dialogue, active listening and years of hard work and the ability to endure setbacks. These qualities are sometimes rare in the financial world and crypto space, but they are highly available in this gem of a project and the wonderful and dedicated Ocean community.

Description of the project / How does this project drive value to the Ocean ecosystem?

The Ocean market has very much to offer. Let us talk about it and introduce the scientific community to Ocean.The scientific community is a very dedicated, innovative community with a wide variety of data, skills and hunger for new applications while being backed with huge research grants by the European Commission, i.e. Horizon 2020…

All three; the open data, the science community and the Ocean Market could benefit from each other, why not give it a shot?

As I am not a developer the result will not be an application, but answers and statements gathered throughout a hopefully fruitful series of dialogues. These shall be presented and disseminated during the ongoing process as blog posts and shall be collected in what could be a Medium article (or other format if it is prefered by the community).

If interest has been stirred, assistance will be given to new participants to create new datasets in the market, find the right data and to get in contact with the developing community. This will include demonstrations and workshops. Interested persons and institutions will also be directed to the open arms and the guidance of the Ocean Academy.

Any prior work completed thus far?

What are key milestones and the target dates for each milestone?

Just me. A dedicated problem-solver and Ocean enthusiast that believes in an inclusive decentralized global data market for everybody.

Some background with potential relevance to this grant proposal:

Co-Founder of the YES! - Young Economic Summit. The YES! – Young Economic Summit is the largest German school competition on economic and social challenges for teams of the grades 10 to 12 working with over 200 researchers of the leading economic think tanks from all over Germany. While no longer active full-time in this project I remain connected to various research institutions and researchers.

Worked as project manager or the ZBW - Leibniz Information Centre for Economics, the world’s largest research infrastructure for economic literature, in the Area of Digital Information Infrastructures. It is a mission of the ZBW to make information accessible and visible for all. Open Science, Open Access, Open Tools and digitization of science make a large part of the ZBW’s vision and mission.

Worked as project manager for the Kiel Institute for the World Economy, one of the world’s leading economic think tanks, building the Global Economic Symposium. The Global Economic Symposium (GES) has established a significant international reputation as a research-centered, solution-oriented high-level conference and has attracted Nobel Laureates, Heads of State, Ministers, CEOs of major multinational companies, heads of international organizations, leading representatives of civil society institutions, and many other major decision makers and thought leaders in the past years. It is now called the Global Solutions Summit.

An average publisher/data service provider can be considered to have a higher stake in the market than an average user. Based on the time horizon and growth of the market approx. 30.000 $Ocean for a potential new publisher. In the best case I assume 2-3 new publishers on the marketplace.

An average high quality data pool can be estimated to have at least at TVL of 100.000 $Ocean over a year. To calculate this for 3 publishers we assume three pools per publisher.

Trade volume will generate network revenue. While it is difficult to predict the total usage over a year we add another 50.000 on network revenue over the course of a year.

This does not yet include the really big picture to achieve an integration in the European Open Science Cloud (EOSC). This would be a longer term goal and a tremendous success.

Once up and running, the EOSC will offer Europe’s 1.7 million researchers and 70 million science and technology professionals a platform to store, share and reuse their data across disciplines and borders. With this in mind starting research is just the first step to unlock a much bigger development.

Please take this example and create your own proposal for the Ocean DAO.

If you do not vote for this proposal I do not take it personal. If you have a better idea, I hope I motivated you to bring your own proposal forward to the Ocean DAO. This lives from a high number of ideas and contributions and I am very excited to see even more proposals here in the near future.

The strategy includes blockchain, privacy-preserving computing, AI/ML and goals and measures to build a new data economy from here on. The interaction with leading think tanks, researchers and associations to implement solutions as Ocean Protocol is now on the official agenda in Germany and as contacts with these stakeholders have been established over the past weeks this gives a huge boost to this proposal.

Unfortunately the publication is only available in German for the time being.

Relevant pieces from the official document that are at the core of this proposal will be added over the next days. 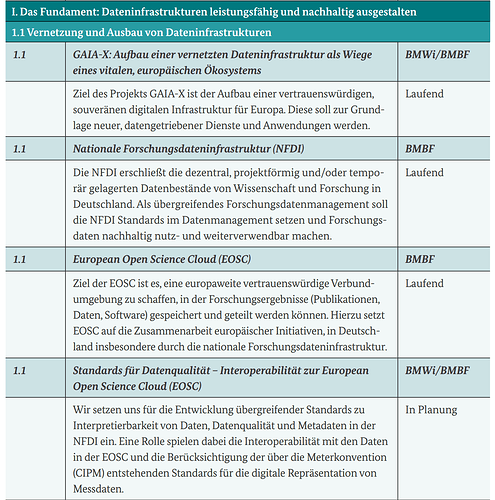 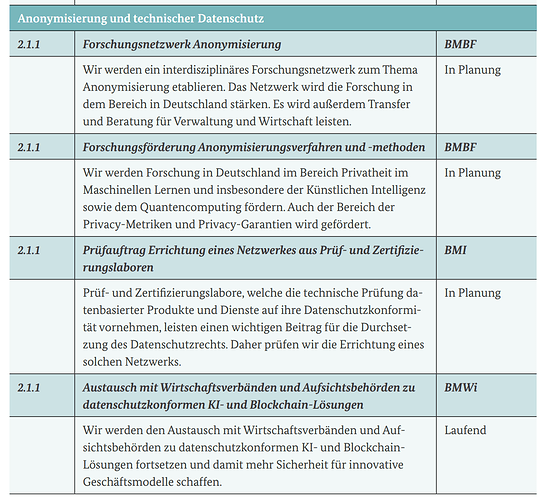 This strategy paper really looks interesting.
I think there are probably also a lot of grants to be accessed as a follow up.

I truly think that a lot of grants will be enables and funding for prototypes as well. This has already been brought up on the agenda of the meetings. Lets see how the first meetings go. Crossing fingers.

The first two meetings and demonstrations of the Ocean marketplace with academic institutions have been confirmed and will take place during the first half of February. I will keep you updated on the progress.

Will you make your slide decks available?

Would be a great option if they reach a certain level of design, but it is not part of this proposal right now.