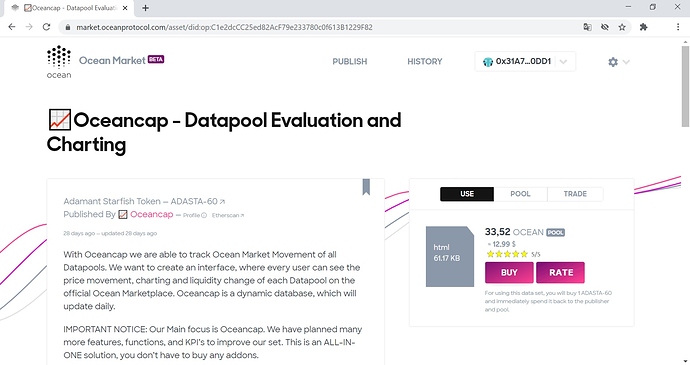 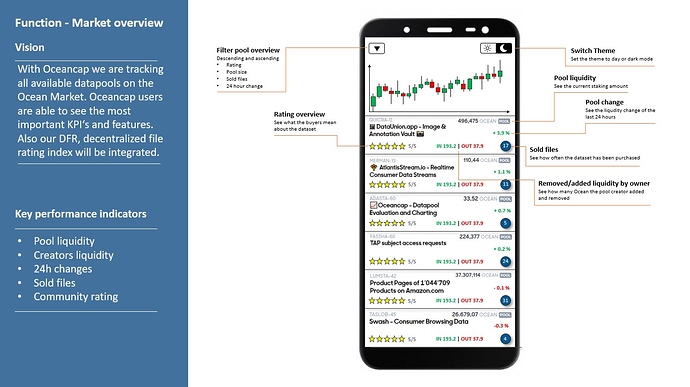 What problem is your project solving? So far users are not able to estimate the quality of a dataset on the Ocean Market. With DFR, users are able to give a data file rating after they have bought it. Other users will than be able to see the data file rating. This will bring a lof ot value to the Ocean Market since users are encouraged to buy good datasets. Bad actors and malicious datasets will also be easier to track.

IF: Build / improve applications or integration to Ocean, then:

What is the project roadmap?

If the project includes community engagement:

For each team member, give their name, role and background such as the following.

Hi @Oceancap. OceanDAO is excited to have your proposal! Might you have links to any team member profiles? Twitter, LinkedIn, Github, or otherwise? Could be useful to update in the proposal. Thanks!

Right now we decided to stay anonymous, but we might change that in the future. Thanks for your understanding!

For low-cost datasets, pump-and-dumpers could just invest when the price is low, buy several copies, give good ratings, raising the price, then they take their profit. The dataset might be total garbage.

The mere fact that someone bought a dataset is not enough to establish the credibility of their rating.

For a high-cost dataset, few people are going to buy it, so there will be few ratings. Rating a dataset based on the description and data sample is like rating a movie based on the poster and the trailer.

Moreover, if someone bought a good dataset for a high price and got a lot of value out of it, what are their incentives to give it a good rating? If they don’t want their competition to buy the dataset, they might say that it’s crap.

A better solution would be for there to be independent and neutral ratings specialists. Such a specialist could contact a dataset provider and vet them. Maybe they meet with them and come to a thorough understanding of how the dataset was produced. Maybe they spend some time at a computer with someone else running it, exploring the dataset, to get a sense of what’s really in it. All of this takes time and money to do, so what is the incentive for the ratings specialist? Maybe their ratings summaries are free but if you want their detailed report on a dataset, you have to buy it?

Look into the ratings systems at Amazon, Goodreads, Yelp, The Wirecutter, Consumer Reports, and Moody’s. How credible are they? Which ones are more credible and why?

For low-cost datasets, pump-and-dumpers could just invest when the price is low, buy several copies, give good ratings, raising the price, then they take their profit. The dataset might be total garbage.

-since the datafile is cheap, a lot of users might buy it and rate it, this will counteract such behabiour

For a high-cost dataset, few people are going to buy it, so there will be few ratings. Rating a dataset based on the description and data sample is like rating a movie based on the poster and the trailer.

Users rate it after they have bought the file, so they can test more than just the sample!

So far this is an early concept, we will collect more ideas and might add rating categorys if the community wants to do so! For us a rating mechanism seems very helpful because right now there is no way to visualize data quality/a file review. When the Ocean Market is growing there might be a lot of users who are not part of the telegram community. They need mechanisms to ensure and track the quality of data files. Thanks for your feedback sir!

since the datafile is cheap, a lot of users might buy it and rate it, this will counteract such behabiour

Datasets aren’t like books, movies or music. They’re not pop culture items with high potential demand. They’re niche products. For a typical dataset, I think it might be quite common for pump-and-dumper demand to exceed legitimate user demand.

And remember, even a legitimate user might give a good dataset a low rating because they want their competitors to think it’s crap.

I’m not against the idea of ratings. In fact, some system of rating and reviewing datasets is probably necessary, but maybe it doesn’t need to be built in to Ocean Protocol or Ocean Market. That would make it even more decentralized.

There are “Buy only” pools without any liquidity. How you want to check data quality for those?

Liquidity pools also could get manipulated by whales with bigger Ocean amounts. So a rating system might be needed to check the data rating score and build confidence for new users.

Hi, A community member (myself), who contributes to Ocean-related initiatives, won your logo competition but you failed to provide with the prize (which was a token amount in itself). Why do you think the community should reward and trust you with 10,000 Ocean Tokens!?!

Also, can you stop using the logo.

you have send us your ERC20 adress just recently (2 days ago).
and have already received your reward by now.