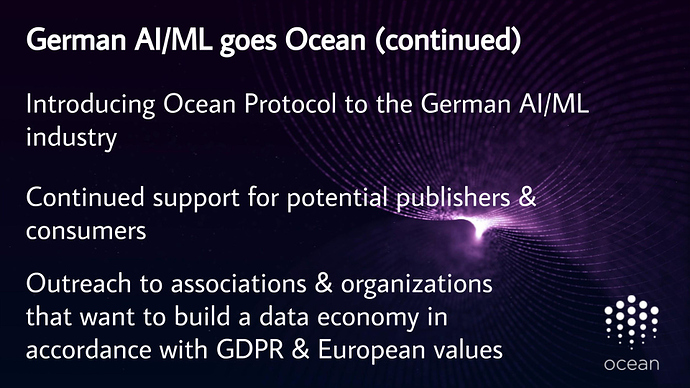 Data Brokers and Evotegra will continue to introduce Ocean Protocol and the decentralized Ocean Datamarket to leading German AI/ML companies. Our goal is give Ocean Protocol additional visibility to the AI/MLindustry, support new publishers in market exploration and to initiate the launch of a European/German Ocean Market for AI/ML publishers and data service consumers. With this 2nd proposals we seek for continued funding for our work that resulted in very positive feedback so far.

The proposal in just one sentence

Together we aim to kick-start the European/German data economy by introducing Ocean Protocol to leading German AI/ML companies and through supporting interested companies in entering the market.

Description of the project / How does this project drive value to the Ocean ecosystem?

Evotegra and Data Brokers have been proven to be a perfect fit with aligned interest. We are passionate about our business and convinced of the potential of Ocean Protocol. Together we will introduce Ocean Protocol and the Ocean Marketplace to other potential market participants with all the knowledge and experience we have gathered so far. Furthermore we will assist publishers and consumers in market exploration. We believe in the potential of Ocean Protocol being the connecting tissue of Germany’s and Europe’s future privacy-preserving and GDPR-compliant data economy.

What is the final product?

Any prior work completed thus far? 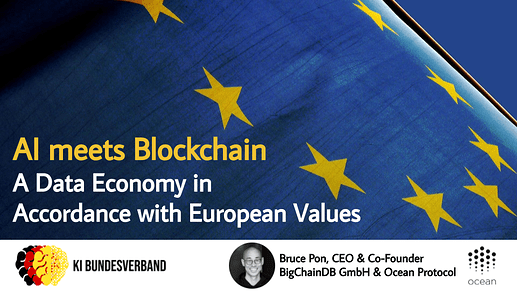 What are key milestones and the target dates for each milestone?

An average publisher/data service provider can be considered to have a higher stake in the market than an average user. Based on the time horizon and growth of the market approx. 30.000 $Ocean for a potential new publisher.

An average high quality data pool can be estimated to have at least at TVL of 100.000 $Ocean over a year. To calculate this for 50 publishers we assume three pools per publisher.

Trade volume will generate network revenue. While it is difficult to predict the total usage over a year we add another 2.500.000 on network revenue over the course of a year.

Thanks a lot @AlexN … it is a wonderful community and I am very happy to be a part of it.

We updated our description as the official event with the German AI Association has now been announced for March 4, 2021.

Thank you for providing a reconciliation to your deliverables @kaimeinke!